Nominated twice for the Academy Award for Best Actor (Penny Serenade and None But the Lonely Heart) and five times for a Golden Globe Award for Best Actor, Grant was continually passed over. In 1970, he was presented an Honorary Oscar at the 42nd Academy Awards by Frank Sinatra “for his unique mastery of the art of screen acting with the respect and affection of his colleagues

His mother had suffered from clinical depression since the death of a previous child. Her husband placed her in a mental institution and told his 9-year-old son only that she had gone away on a “long holiday”. Believing she was dead, Leach did not learn otherwise until he was 31 and discovered her alive in a care facility.  When Leach was 10, his father abandoned him after remarrying and having a baby with his new young wife.

Leach was expelled from the Fairfield Grammar School in Bristol in 1918. After joining the “Bob Pender Stage Troupe”, Leach performed as a stilt walker and traveled with the group to the United States in 1920 at the age of 16 on the RMS Olympic, on a two-year tour of the country. He was processed at Ellis Island on July 28, 1920.

When the troupe returned to the UK, he decided to stay in the U.S. and continue his stage career. During this time, he became a part of thevaudeville world and toured with Parker, Rand, and Leach.

Still using his birth name, he performed on the stage at The Muny in St. Louis,Missouri, in such shows as Irene (1931), Music in May (1931), Nina Rosa (1931), Rio Rita (1931), Street Singer (1931), The Three Musketeers (1931), and Wonderful Night (1931). Leach’s experience on stage as a stilt walker, acrobat, juggler, and mime taught him “phenomenal physical grace and exquisite comic timing” and the value of teamwork, skills which would benefit him in Hollywood.

Leach became a naturalized United States citizen on June 26, 1942, at which time he also legally changed his name from “Archibald Alexander Leach” to “Cary Grant”.

After appearing in several musicals on Broadway under the name Archie Leach, Leach went to Hollywood in 1931.  When told to change his name, he proposed “Cary Lockwood”, the name of the character he had played in the Broadway show Nikki, based upon the recent film The Last Flight.

He signed with Paramount Pictures, where studio bosses decided that the name “Cary” was acceptable but that “Lockwood” was too similar to another actor’s surname. Paramount gave their new actor a list of surnames to choose from, and he selected “Grant” because the initials C and G had already proved lucky for Clark Gable and Gary Cooper, two of Hollywood’s biggest film stars.

Grant appeared as a leading man opposite Marlene Dietrich in Blonde Venus (1932), and his stardom was given a further boost by Mae Westwhen she chose him for her leading man in two of her most successful films, She Done Him Wrong and I’m No Angel (both 1933).

I’m No Angel was a tremendous financial success and, along with She Done Him Wrong, which was nominated for an Academy Award for Best Picture, saved Paramount from bankruptcy. Paramount put Grant in a series of unsuccessful films until 1936, when he signed with Columbia Pictures. His first major comedy hit was when he was loaned to Hal Roach‘s studio for the 1937 Topper (which was distributed by MGM).

The Awful Truth (1937) was a pivotal film in Grant’s career, establishing for him a screen persona as a sophisticated light comedy leading man. As Grant later wrote, “I pretended to be somebody I wanted to be and I finally became that person. Or he became me. Or we met at some point.”  Grant is said to have based his characterization in The Awful Truth on the mannerisms and intonations of the film’s director, Leo McCarey, whom he resembled physically. As writer/director Peter Bogdanovich noted, “After The Awful Truth, when it came to light comedy, there was Cary Grant and then everyone else was an also-ran.”

The Awful Truth began what The Atlantic later called “the most spectacular run ever for an actor in American pictures”.   During the next four years, Grant appeared in several classic romantic comedies and screwball comedies, including Holiday (1938) and Bringing Up Baby (1938), both opposite Katharine Hepburn; The Philadelphia Story (1940) with Hepburn and James Stewart; His Girl Friday (1940) with Rosalind Russell; and My Favorite Wife (1940), which reunited him with Irene Dunne, his co-star in The Awful Truth. During this time, he also made the adventure films Gunga Din (1939) with Douglas Fairbanks, Jr. and Only Angels Have Wings (1939) with Jean Arthur and Rita Hayworth and dramas Penny Serenade (1941), also with Dunne, and Suspicion (1941), the first of Grant’s four collaborations with Alfred Hitchcock.

Grant remained one of Hollywood’s top box-office attractions for almost 30 years.  Howard Hawks said that Grant was “so far the best that there isn’t anybody to be compared to him”.[15] David Thomson called him “the best and most important actor in the history of the cinema“.

Grant was a favorite of Hitchcock, who called him “the only actor I ever loved in my whole life”.

Besides Suspicion, Grant appeared in the Hitchcock classics Notorious (1946), To Catch a Thief(1955), and North by Northwest (1959). Biographer Patrick McGilligan wrote that in 1965 Hitchcock asked Grant to star in Torn Curtain (1966) only to learn that Grant had decided to retire after making one more film, Walk, Don’t Run (1966);

Paul Newman was cast instead, oppositeJulie Andrews.   Producers Broccoli and Saltzman originally sought Cary Grant for the role of James Bond in Dr. No but discarded the idea as Grant would be committed to only one feature film and the producers decided to go after someone who could be part of a franchise.

In the mid-1950s, Grant formed his own production company, Granart Productions, and produced a number of films distributed by Universal, such as Operation Petticoat (1959), Indiscreet (1958),That Touch of Mink (co-starring with Doris Day, 1962), and Father Goose (1964). In 1963, he appeared opposite Audrey Hepburn in Charade. His last feature film was Walk, Don’t Run three years later, with Samantha Eggar and Jim Hutton.

Grant was the first actor to “go independent” by not renewing his studio contract, effectively leaving the studio system,  which almost completely controlled what an actor could or could not do. In this way, Grant was able to control every aspect of his career, at the risk of not working because no particular studio had an interest in his career long term.

He decided which films he was going to appear in, often had personal choice of directors and co-stars, and at times even negotiated a share of the gross revenue, something uncommon at the time. Grant received more than $700,000 for his 10% of the gross for To Catch a Thief while Hitchcock received less than $50,000 for directing and producing it.

Grant was nominated for two Academy Awards, for Penny Serenade (1941) and None But the Lonely Heart (1944), but never won a competitive Oscar; he received a special Academy Award for Lifetime Achievement in 1970. Accepting the Best Original Screenplay Oscar in 1965, Father Goose co-writer Peter Stone had quipped, “My thanks to Cary Grant, who keeps winning these things for other people.” In 1981, Grant was accorded the Kennedy Center Honors.

Grant poked fun at himself with statements such as “Everyone wants to be Cary Grant—even I want to be Cary Grant”, and in ad-lib lines—such as in the film His Girl Friday, saying, “I never had so much fun since Archie Leach died”. In Arsenic and Old Lace (1944), a gravestone is seen bearing the name Archie Leach. According to a famous story now believed to be apocryphal, after seeing a telegram from a magazine editor to his agent asking “How old Cary Grant?” Grant reportedly responded with “Old Cary Grant fine. How you?

Cary Grant retired from the screen at 62 when his daughter Jennifer was born, in order to focus on bringing her up and to provide a sense of permanency and stability in her life.

While bringing up his daughter, he archived artifacts of her childhood and adolescence in a bank-quality room-sized vault he had installed in the house.

His daughter attributed this meticulous collection to the fact that artifacts of his own childhood had been destroyed during the Luftwaffe’s bombing of Bristol in the Second World War (an event that also claimed the lives of his uncle, aunt, and cousin as well as the cousin’s husband and grandson), and he may have wanted to prevent her from experiencing a similar loss.

Although Grant had retired from the screen, he remained active.

In the late 1960s, he accepted a position on the board of directors at Fabergé. By all accounts this position was not honorary, as some had assumed; Grant regularly attended meetings and his mere appearance at a product launch would almost certainly guarantee its success. The position also permitted use of a private plane, which Grant could use to fly to see his daughter wherever her mother, Dyan Cannon, was working.

He was a keen motoring enthusiast and, like many other Hollywood stars of the era, owned many notable cars. One of the first he owned was a 1929 Cadillac Cabriolet. His love of Cadillacs never waned and he later purchased a Cadillac Eldorado Biarritz. Other cars that he owned included an MG Magnette and a Sunbeam Alpine series one roadster.

In the last few years of his life, Grant undertook tours of the United States in a one-man show, A Conversation with Cary Grant, in which he would show clips from his films and answer audience questions. Grant was preparing for a performance at the Adler Theatre in Davenport, Iowa, on the afternoon of November 29, 1986, when he sustained a cerebral hemorrhage (he had previously suffered a stroke in October 1984). His wife did not know what was going on and she went to a local pharmacy to get aspirin. He died at 11:22 p.m.  in St. Luke’s Hospital at the age of 82.

The bulk of his estate, worth millions of dollars, went to his fifth wife, Barbara Harris, and his daughter, Jennifer Grant

In 2001, a statue of Grant was erected in Millennium Square, a regenerated area next to Bristol Harbour in his city of birth, Bristol.

In November 2005, Grant came in first in the “The 50 Greatest Movie Stars of All Time” list by Premiere magazine.  Richard Schickel, the film critic, said about Grant: “He’s the best star actor there ever was in the movies. 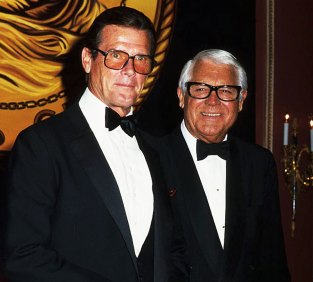 A lire aussi ( A french article)