A New Kind of Love is a 1963 American romantic comedy film directed by Melville Shavelson and starring Paul Newman and Joanne Woodward. Frank Sinatra sings “You Brought a New Kind of Love to Me” over the opening credits.

A womanizing american reporter assigned in Paris (Paul Newman) mistakes a cynical fashion designer (Joanne Woodward) for a prostitute. He decides to interview her for a series of articles then falls in love with her. The girl goes along with it, first out of revenge as he snubbed her during a past encounter, then out of feelings of her own.

Paul Newman, taking his second spin on the marriage-go-round, grabbed the brass ring with Joanne Woodward.

On a Hollywood landscape littered with countless broken marriages, the Newman-Woodward pairing became the gold standard: They celebrated 50 years together on Jan. 29.

And when Newman died Friday at the Connecticut home they shared since 1960, Woodward was still there – until death did them part.

Newman once attributed their lasting union to “correct amounts of lust and respect.”

He offered an oft-quoted response when asked in Playboy magazine about the temptations of other women: “I have steak at home. Why go out for hamburger?”

The couple met and fell in love while Newman made his 1953 Broadway debut in William Inge’s “Picnic,” in which Woodward was an understudy.

Five years later, shortly after Newman and his first wife divorced, he married the petite blond in a Las Vegas civil ceremony. The couple moved into an 18th-century Connecticut farmhouse, a decision that Woodward later said solidified their marriage.

“We were never Hollywood people,” the Oscar-winning actress told the Daily News in 2001. “We just liked it better here. It also probably helps that we always enjoyed each other’s company.”

They appeared in several films together, including “The Long Hot Summer,” “Paris Blues” and “Mr. and Mrs. Bridge.” Newman directed Woodward in several other movies, including “Rachel, Rachel” – a Best Picture nominee.

When Woodward returned to Sarah Lawrence College to earn her degree at age 60, she graduated with youngest daughter Clea. Newman marked the occasion by delivering the commencement address.

The high-profile couple enjoyed their anonymity in Westport, Conn., where they helped restore and reopen the Westport Country Playhouse.

Woodward, as the theater’s artistic director, cast her husband in the Stage Manager role in a production of “Our Town.” It moved to Broadway, where Newman earned his first Tony nomination in 2003. 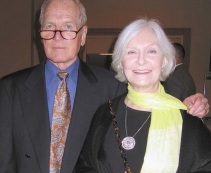 2 thoughts on “A new kind of love : Paul Newman and Joanne Woodward”